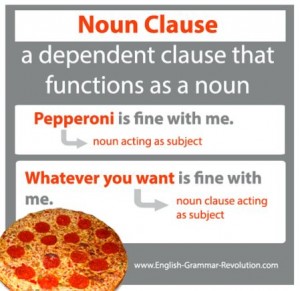 Let’s look at noun clauses, shall we?

I’m going to show you what they are, and how to use them in IELTS writing Task 1 and Task 2.

A noun clause is a dependent clause that functions as a noun.  It cannot stand alone, and it’s preceded by words and phrases like that, the fact that, whether, why, how, how much, and so on.  [You might have to read that a couple of times]

The noun clause can also be the subject - as in this sentence:

That it works is acknowledged by everyone who uses Anki.

Here are some noun clauses from Task 2

Opinions are divided on whether having more old people than young people is beneficial or harmful.

Smoking should be banned in public places because of the fact that it is unpleasant to be in the vicinity of people who are smoking.

What about some Task 1 introductions?

The chart shows how much meat was consumed per person in a particular European country.

The chart shows how many people owned mobile phones in 10 European countries.

The noun clause can also be the subject

Whether or not it is better to go to university or get a job is a matter of some controversy.

The fact that it he speaks really good English helped him to get a good job.

[Part 2 – talk about a success you have had]

I’m going to talk about how I passed my university entrance exams, without which I could not have become a doctor

I hope you can see why noun clauses are important for both writing Task 1 and Task 2 and the speaking test.  If you’re serious about succeeding in IELTS, you really need to understand them.

[Find out more about noun clauses here.
Do some exercises here - external links]

Grammar for IELTS – noun phrases – Succeed In IELTS with Tony